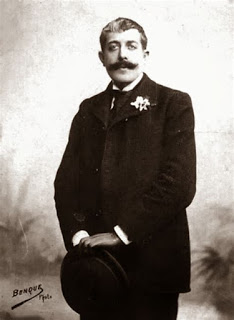 An extract from Monsieur de Phocas, a work by the late 19th century poet Jean Lorrain. Jean Lorrain was an interesting character in the Dandyist circles of Montmarte within that era, and was a frequent columnist for the magazine Le Courrier Francais.

“In the course of my life I have had pre-pubescent ballerinas; emaciated duchesses, dolorous and forever tired, melomaniac and morphine-sodden; bankers’ wives with eyes hollower than those of suburban streetwalkers; music-hall chorus girls who tip creosote into their Roederer when getting drunk…

I have even had the awkward androgynes, the unsexed dishes of the day of the tables d’hote of Montmartre. Like any vulgar follower of fashion, like any member of the herd, I have made love to bony and improbably slender little girls, frightened and macabre, spiced with carbolic and peppered with chlorotic make-up.

Like an imbecile, I have believed in the mouths of prey and sacrificial victims. Like a simpleton, I have believed in the large lewd eyes of a ragged heap of sickly little creatures: alcoholic and cynical shop girls and whores. The profundity of their eyes and the mystery of their mouths… the jewellers of some and the manicurists of others furnish them with eaux de toilette, with soaps and rouges. And Fanny the etheromaniac, rising every morning for a measured dose of cola and coca, does not put ether only on her handkerchief.

It is all fakery and self-advertisement – truquage and battage, as their vile argot has it. Their phosphorescent rottenness, their emaciated fervour, their Lesbian blight, their shop-sign vices set up to arouse their clients, to excite the perversity of young and old men alike in the sickness of perverse tastes! All of it can sparkle and catch fire only at the hour when the gas is lit in the corridors of the music-halls and the crude nickel-plated décor of the bars. Beneath the cerise three-ply collars of the night-prowlers, as beneath the bulging silks of the cyclist, the whole seductive display of passionate pallor, of knowing depravity, of exhausted and sensual anaemia – all the charm of spicy flowers celebrated in the writings of Paul Bourget and Maurice Barres – is nothing but a role carefully learned and rehearsed a hundred times over. It is a chapter of the MANCHON DE FRANCINE read over and over again, swotted up and acted out by ingenious barnstormers, fully conscious of the squalid salacity of the male of the species, and knowledgeable in the means of starting up the broken-down engines of their customers.

To think that I also have loved these maleficent and sick little beasts, these fake Primaveras, these discounted Jocondes, the whole hundred-franc stock-in-trade of Leonardos and Botticellis from the workshops of painters and the drinking-dens of aesthetes, these flowers mounted on a brass thread in Montparnasse and Levallois-Perret!

And the odious and tiresome travesty – the corsetted torso slapped on top of heron’s legs, painful to behold, the ugly features primed by boulevard boxes, the fake Dresden of Nina Grandiere retouched from a medicine bottle, complaining and spectral at the same time – of Mademoiselle Guilbert and her long black gloves!…

Have I now had enough of the horror of this nightmare! How have I been able to tolerate it for so long?

The fact is that I was then ignorant even of the nature of my sickness. It was latent in me, like a fire smouldering beneath the ashes. I have cherished it since… perhaps since early childhood, for it must always have been in me, although I did not know it!”