It may strike the reader as strange, and indeed somewhat ridiculous, to read that Óðinn, the Norse god, is in my family tree, or any family tree for that matter. This was also my initial reaction, and if taken at face value, the idea of supernatural beings mating with humans could be enough to completely discredit paganism as a serious and beneficial spiritual practice. After all, as I have already explained, the gods ought to be considered not as physical beings, but as forces of nature, such as one would consider heat, gravity and electricity among others.

A brief background regarding my ancestry:

My surname (Apap) has enigmatic origins. It was originally De Apapis, which may come from the Dia Papi (through the Father, IE through God) but I can’t be sure of this at the present time. The progenitor of my line, Leonardo De Apapis, was a Notary (essentially a lawyer) who had a son, Salvatore. Salvatore married leonara De Nasi, a member of an old Sicilian aristocratic family that also descends from the Jewish King David (Nasi means “Prince” in Hebrew). Though they undoubtedly had some Jewish ancestry, they were predominantly European.

The De Nasis had genetic ties to the De La Porte family, who were Normans who were Governors of Argos in Greece. The De La Portes descendant from Heinrich VII, King of Sicily, through his bastard son Richard, who was made the Count of Chieti in Italy. Henry VII’s ancestors on his mother’s side were Dukes of Austria, mostly named Leopold.

The first Leopold in this line married Agnes, daughter of Henry IV of the Holy Roman Empire. Henry IV was descended from various Kings and nobles, most notable and historically significant of which was Rollo, first Norman King of France. Many will know of Rollo through the “Vikings” TV  show. Rollo was descended from many petty Kings of the Far North, though I will spare the details here. The pictures of my family tree will be shown below. Some of these Kings are verified historically, some are semi-mythical or unattested archaeologically, but trace back to none other than Oðinn himself.

Lengthy background aside, what does this mean?

Some wish to claim that the presence of Óðinn in such family trees is evidence that a historical Óðinn genuinely existed despite the evidence which suggests that Óðinn, at least in the sense of physical being, is allegorical. Óðinn is present in so many family trees and across such a wide geographical area (all around Scandinavia and Northern Germany) that to suggest Óðinn genuinely conceived of so many physical sons would be to claim he procured an entire harem of women and rotated between them as he traveled around Scandinavia as some kind of promiscuous gypsy.

The supernatural, metaphysical phenomenon which are symbolized by the gods should not be narrowly defined by their physical representation in our folklore and myth, but these motifs and physical ideas about the metaphysical should merely be seen as tools through which to communicate absolute truths. In the case of Óðinn, as I have explained numerous times, we find the concept of an enduring ancestral soul, or mind.

The proto Indo European term “Óð” can be loosely translated as “mind” or consciousness, a “Holy Spirit” if you will. Similar to the Hindu ritual purposes of Soma, the Norse constructed a spiritual drink known as Óðroerir, a drink that inspired great works of poetry and praise, the term being loosely translated to “stirrer of the spirit”.

Ergo, when a family line could be traced back no further, the addition of Óðinn as an ancestor should be thought of as a means of summarizing all of the unknown ancestors that came before; in a sense, they are all Óðinn because they are all of the same spirit and blood, the same Óð.

That’s all for now. Remember to Hail Oðinn!

It’s in reverse order, so I’m sorry for any confusion. Topmost image are more recent ancestors. 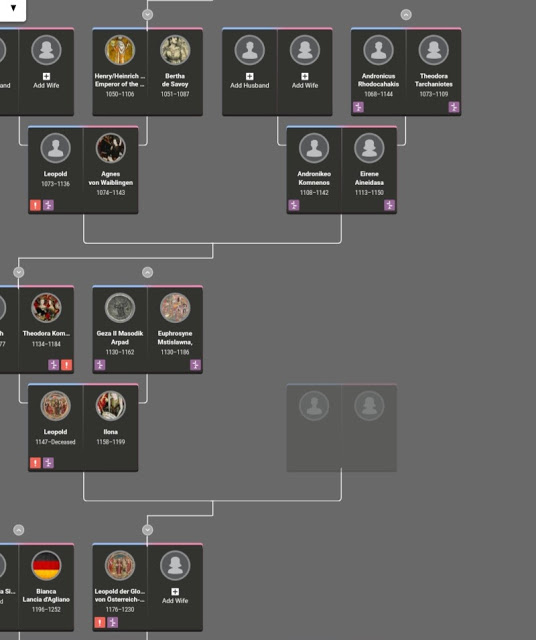 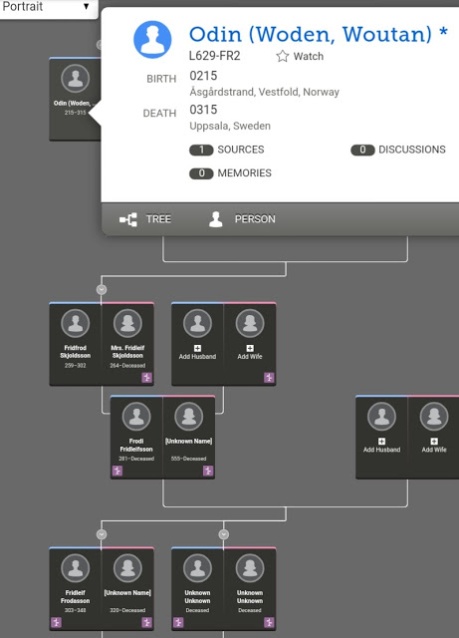