Just a quick one for today, though I’ll hopefully have time to expand this out in future.

Though the Bible (or at least mainstream translations of it) has a load of crap in it,  this verse is a good one:

“Woe unto them that call evil good, and good evil; that put darkness for light, and light for darkness; that put bitter for sweet, and sweet for bitter!”

What I love about this quote is its relevance, even after 4000 years. It is so profound because this is happeningmore and more in this modern age; the virtue of charity, once meaning to selflessly help others and to make the world a better place has been twisted, taking advantaging of people’s good nature and has become a scam as money is sent abroad as “charity” to African royal families to buy weapons and to Israel as “charity aid” to fund their parasitic genocidal regime. The virtue of love, ONE MAN and ONE WOMAN in a lifelong commitment to each other has been perverted by Marxism and the NWO into a universalist, inclusivist expression of mere carnal aggression or “lust”, which brings me onto the subject of today’s article.

The rainbow, once a symbol of metaphysical significance, has now come to be associated with transvestite, homosexual, pedophile and miscellaneous postmodernist sexuality movements, the ultimate aim of which is to dissolve the traditional concept of the nuclear family.

The Rainbow Flag, as it is now called by its advocates, was invented by Jewish politician and homosexual Harvey Milk in the 1970s (notice a theme with these people?). From this point onward, or at least after its popularisation, it is for most of difficult to see the rainbow as meaning anything other than what they want it to be.

However, it is important that we do because the rainbow is a symbol that means something much more beneficial. It represents the unification of the chakras, the spiritual energy centres of the subtle body.

Red represents forgiveness, because everything starts with forgiveness. Red is the colour of the root chakra, the heart of Saturn which is at the base of the spine.

Yellow represents instinct or drive, channeled through the sacral chakra, which in men is the testicles and in women is the ovaries, as through this primal will one ascends to higher virtues. We are driven towards trust, instinct and even love by our hormonal inclinations, which is why it is important for those who wish to control us to cut us off spiritually at this point, perverting our hormones and sexual urges, as then we cannot ascend any further. 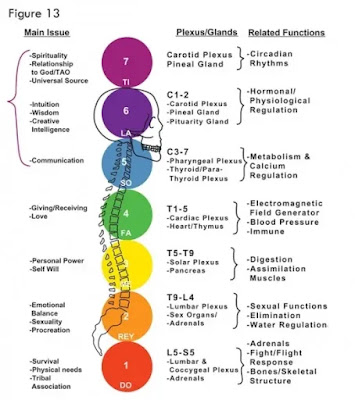 Orange represents gut instinct and trust, which is rooted in the solar plexus chakra, in the gut.

Green represents the virtue of love (not lust, real love) which resonates through the heart chakra, as when we love someone it causes our heart to beat more quickly as its energetic frequency increases.

Blue represents the virtue of truth, symbolised by the throat chakra because our voice is supposed to be the instrument through which we convet truth. Emphasis on supposed.

Selflessness is symbolised by the colour indigo and is associated with the Third Eye, the brain’s pineal gland.

Self sacrifice, the highest and most difficult to achieve of all virtues is represented by violet. Linked to the crown chakra above the head.

The powers at be chose symbols like the Rainbow Flag very deliberately, because they know that choosing symbols that are important to the expression of truth and confusing them is the best way to sow ignorance and inner conflict and stop us from speaking the truth, which cuts us off at the throat chakra, if we can even ascend that far.