In Iceland up until modern times, Galdrastafur, protective staves, were used by the rural folk as they were believed to ward the inscriber from negative events and to give good luck. The runes that form the Norse Futhark alphabet also have a similar purpose apart from their significance as a writing system. These kind of runic symbols can be found all across Europe, though Iceland provides the best preserved tradition with a more extensive list of staves.

Galdrastafur, depending on the intent, should either be drawn on one’s self, tattooed, put on one’s clothes, put on the clothes of the one that you intend to bless/curse, or on a particular item, this all depends on the intention of the incantation.

The Galdrastafur we have today have been passed down in what are known as grimoires, a kind of “spell book”, if you like; it is my suspicion that many have these books have been confiscated by the church of the centuries and comprise a large portion of the confidential Vatican archives, though I have no concrete evidence of this. The oldest known Icelandic grimoire dates from the 17th century, before which point it can be assumed the grimoires were passed down through word of mouth, which became more difficult as Christianity encroached.

One should be wary of the authentic of Galdrastafur, particularly those from a modern or relatively recent source. The Galdrastafur recording in the earlier annals are more likely to be authentically pagan and have pre-Christian roots.

Here is a extensive though by no means comprehensive list of Galdrastafur as well as how they should be used. I have acquired these grimoires from the archives of the National Museum of Iceland in Reykjavik:

Að unni: Meaning “to have another”

Should be inscribed on the wearer to attract the affections of another or on items owned by the person one wishes to attract.

Should be inscribed on one’s weapons, clothes and armour for fortune in battle and to intimidate one’s enemies. According to Germanic legend, Sigurd found an item inscribed with the Helm of Awe in the hoard when he killed Fafnir the dragon. In Volsunga Saga, it is written:
The Helm of Awe
I wore before the sons of men
In defence of my treasure;
Amongst all, I alone was strong,
I thought to myself,
For I found no power a match for my own. 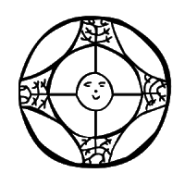 This symbol is intended to be drawn on the sides of barrels, large liquid containers, bottles and the like to prevent them from leaking.

This rune should be carved on an item or piece of leather and coloured red with your own blood, it should then be placed below the oars on the boat when you row. It must be taken both onto the boat and off the boat by you each time. No one will be able to row faster than you.

Fengur: “Obtained”
Worn either by a husband to become more fertile or by a wife to increase fertility to assist pregnancy. There are a manner of old remedies for infertility, runology is only one of them. There is also herbology which is backed by clinical research. I will do another post in future on herbology.
Veiðistafur: Fishing stave

For fortune in fishing. It should be carved on the bottom of one’s fishing boat.

Veiðistafur appears in three manuscripts. I show here the Skuggi version in his 1940 Galdraskræður magazine. It shows 5 faces within the circles. The other two versions don’t, however they add mid cross lines on each arm.

Should be inscribed on oneself or one’s belongings to combat the effects of magic on items. The symbol is said to make one immune to the effects of witchcraft.

Used in order to have good dreams about one’s unfulfilled desires.

An array of runes/staves: Miscellaneous purposes