“The individual is nothing, society is everything” 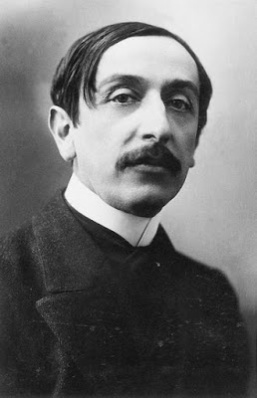 Auguste-Maurice Barrès (19 August 1862 – 4 December 1923) was a French novelist, journalist and politician who was a notable proponent of French ethnonationalism. Barrès was a contemporary and friend of the writer Charles Maurras.

Barrès is considered, alongside Charles Maurras, as one of the main thinkers of ethnic nationalism at the turn of the century in France, associated with Revanchism — the desire to reconquer the Alsace-Lorraine, annexed by the newly created German Empire at the end of the 1871 Franco-Prussian War (Barrès was aged 8 at that time). In fact, he himself popularised the word “nationalism” in French.

He shared as common points with Paul Bourget his disdain for utilitarianism and liberalism.

Opposed to Jean-Jacques Rousseau’s theory of social contract, Barrès considered the ‘Nation’ (which he used to replace the ‘People’) as already historically founded: it did not need a “general will” to establish itself, thus also contrasting with Ernest Renan’s definition of the Nation. Much closer to Herder and Fichte than to Renan in his definition of the Nation, Barrès opposed French centralism (as did Maurras), as he considered the Nation to be a multiplicity of local allegiances, first to the family, the village, the region, and ultimately to the nation-state. Influenced by Edmund Burke, Frédéric Le Play and Hippolyte Taine, he developed an organicist conception of the Nation which contrasted with the universalism of the 1789 Declaration of the Rights of Man and of the Citizen. According to Barrès, the People is not founded by an act of autonomy, but find its origins in the earth (le sol), history (institutions, life and material conditions) and traditions and inheritance (“the dead”). His early individualism was quickly superated by an organicist theory of the social link, in which “the individual is nothing, society is everything”).

Barrès feared miscegenation of modern times, represented by Paris, claiming against Michelet that it jeopardised the unity of the Nation. The Nation was to be balanced between various local nationalities (he spoke of the “Lorraine nationality” as much as of the “French nationality”) through decentralisation and the call for a leader, giving a Bonapartist aspect to his thought which explained his attraction for the General Boulanger and his opposition to liberal democracy. He pleaded for a direct democracy and personalisation of power, as well as for the implementation of popular referendums as done in Switzerland. In this nationalist frame, anti-Semitism was to be the cohesive factor for a right-wing mass movement.

Barrès was not only a philosopher, but also a novelist. The Roman de l’énergie nationale trilogy makes a plea for local patriotism, militarism, the faith to one’s roots and to one’s family, and for the preservation of the distinctive qualities of the old French provinces. Les Déracinés narrates the adventures of seven young Lorrainers who set out to conquer fortune in Paris. Six of them survive in the second novel of the trilogy, L’Appel au soldat(1900), which gives the history of Boulangism; the sequel, Leurs figures (1902), deals with the Panama scandals.
What I personally find interesting about the works of the French nationalists, such as Barrès and Maurras is that despite emerging at the same time as nationalist thinkers such as Nietzsche, the philosophies of the former and latter are diametrically opposed. Whilst Nietzsche favours the support of the nation because of the view that nationhood and commonality of race produces the most excellent individuals, fulfilling the goal of life in becoming an Übermensch, the French nationalists are communitarian, seeing individuals as existing solely to reflect the glory and beauty of the nation and miscegenation as a threat to the ability to do so.
It is my view that the French nationalist position ought to be more favourable; Nietzsche’s thought is too narcissistic, too atheistic and as a result can only produce a material change. Nietzsche’s philosophy is far too close to Existentialism for my taste. It feels merely an intellectual exercise from someone who has acknowledged, albeit falsely the world to be meaningless and absurd.
French nationalist thinkers are in my view more charismatic, more appealing and less cold than the musings of Nietzsche. It is a terrible shame that only the latter has been remembered.
Health and happiness!
C.A., author.